Swan Songs – In Search of the Staffstone

All for a song. Swan Songs: In Search of the Staffstone is the first in a series filled with cliffhangers, mystery, riddles, conflict, and adventure. Imagine another Narnia, another Sword in the Stone, another Hobbit (dragon included). It is here!

Way too long ago I did something regrettable. I gave up a friend. Sure, I may have been going through some tough times but I should have never taken any of it out on him.

What was happening in my life was that I got involved with someone that was very selfish and hurtful. I was never allowed to be right (that’s the key). I was in a state of being totally beat down, totally worthless, totally out of control, totally wrong in every situation. I kept the happy game-face on at all times but was destroyed on the inside.

During this time I had kept in contact with my friend via email. From time to time we would “get into it” over political issues. I’d take the right and he’d take the left. It was over a long period of time that I suppose I started to equate the politial debates with the verbal abuse and arguments that I had been taking from the relationship that I was in. I felt like I was being told I was wrong from everyone and that I had no one else to turn to. Please note that I was in a strange place mentally at that time, I know in my heart that my friend never meant to do any of this and never had the intention of making me feel like that, it was completely my fault for ever giving into those thoughts (I suppose I am just writing this part as some form of explaination.). Soon after, I stopped taking phonecalls and emails and basically broke off all communications.

A few years later his father, someone I’m proud to have known, passed away and I saw my friend at the funeral. When he saw me he jumped out of the “handshake line” and rushed over to me and made me feel as if I was the most important person in the room. I told him that I loved him and gave him a hug that nearly knocked his spectacles off and he walked with me through the line and we tried to “catch up” as the line moved forward. I met him afterward at his mom’s house and he had some friends over and the conversation became political which made me feel uncomfortable for all the old reasons again even though there was no “get into it” situations. So I excused myself and went home.

Recently, I tried out myspace.com to try to regain contact with some old friends and I just happened to come across his profile. I think I’m in a better state of mind now and I really missed him all these years so I clicked the link to add him as a friend to my profile.

Here is an excerpt from the message he sent:

… I don’t care how differently we may see the world for whatever reasons (if we even really do, which I doubt deep down), you are a bro. I love you, man. Always did, always will. No question from now til the end and begin again. …

You know what, friend? You are 100% correct. All I can say is that I’m sorry that it took me so long and thank you for teaching me what I pretended to learn from religion. Turns out I learned very little about the love I’m supposed to show. Please accept my apology. 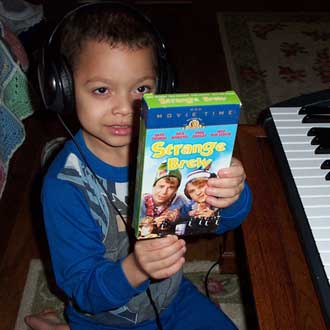 Here’s a pic of my son with our favorite movie of all time. 😆

Let’s all give a shout out to Diane. She was having trouble with her former hosting company and switched. Her page was offline for a couple of days and I was jonesing a bit. I read her daily.